He was born in Shangai in 1954 and started to paint when he was 9 years old.
He was a disciple of two famous Chinese painters Yu Yun-jie e Liu Kemin and completed his studies at the Academy of Art in Shanghai.

He has been living in Italy since 1980, where he attended famous comtemporary artists such as Pietro Annigoni, Giacomo Manzù and Gregorio Sciltian. He mainly enhanced his technique in Rome in the studio of Riccardo Tommasi Ferroni, one of the great masters of contemporary figurative painting.

His realism is not limited inside the foundations of his own culture. He continues his research and study of the work of the greatest masters in the main European museums. His life is a continuous pilgrimage between the western and the eastern world. He considers himself a guest in both worlds. He likes blending them. His thought has roots in philosophical Taoism. “Tao”, that means life is the supreme unity where oppositions of life find unison: the good one (Yang) and the dissolving one (Yin). 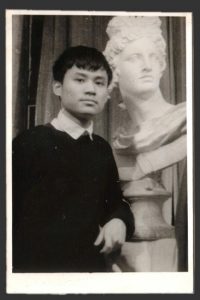 “The plot of his entire work is rich in imagination, skill, experience. He reveals his poetic and technical secrets without difficulty, because in fact they are not secret, they are absolutely evident. In other words he paints with extreme simplicity…” 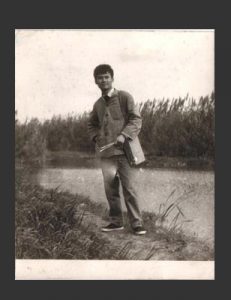 Today he lives in Padua and works as a painter both in Europe and China. He is also the curator of art exhibitions, cultural events and TV documentaries dealing with art and culture.

Since 2016 he has been a consultant for Shanghai International Culture Association of Shanghai Municipality and for the media services company Shanghai Hantang Culture Development. 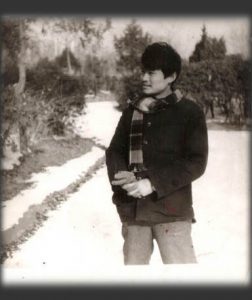 A CONVERSATION WITH  ZHOU ZHIWEI by Maria Luisa Trevisan

Let’s speak about your origins. Where do you come from? Who was your father? Would you like to tell us something about your family?
It was a large family, my father had seven brothers and my mother eight, therefore I have more than fifty cousins. I have a brother and a sister.

What sort of education did your family have? Classical or scientific?
Scientific. My grandfather had a company which produced railway engines and his children became engineers. My father was a metallurgic engineer, he used to build trains, railways.

…so, why haven’t you become an engineer?
My father wanted me to be a musician, I started to study violin when I was very young, then the cultural revolution arrived and effaced everything. I was 14 and the Red Guards broke my violin, we lost everything . I started to devote all my time to drawing, I was very keen on it and…you need nothing but a pencil.
My family was divided into two, one part was communist, in favour of the revolution, the other part was capitalist. My father stood apart he was an intellectual, always with his books. I was for the revolution but as the son of a middle-class family I could not become a soldier. Then my father was sent to a concentration camp and condemned to hard labour. Once he told me that if he did not have any children he would have committed suicide. During the best years of his life, at he top of his career he was taken to the countryside and for a year we did not hear of him.
He had to work the land, was given very little food and was supposed to read Mao. Some of my relatives managed to go abroad.

What about you mother?
My mother came from a lower- middle class family of cloth traders.

…and as far as religion is concerned?
My paternal grandmother, with whom I spent the weekend, was very religious. She prayed a female god, a sort of female Budda named Quan Yin. His complexion was white like milk. She used to put on a cream made of frog milk which made her face exactly like porcelain.
In her house there was an altar and I saw her pray. I saw her white face immersed in a cloud of incense, her clothes were grey bluish, this atmosphere is still in my heart, it is a permanent presence, only later I understood where my colours came from.

Did you earn your living only by painting or did you teach too?
For a while I was in touch with the Academy in Shangai but I don’t have a particular bent for teaching.

What about your education?
I had two Masters, they came from two different schools. One came from the French and Flemish school, the other with whom I’m still in touch followed the teaching of the Russian school, the Soviet Socialism. It was a sort of scientific teaching. For example the light was scientifically calculated according to the theory of Cesjakov as the Stanilasky method for theatre. We studied anatomy, perspective, etc… It was very strict teaching.

So your painting is the synthesis of these two sources?
Yes, very important was also the study of calligraphy and of the traditional technique of Chinese painting, watercolour on rice paper.

Have you always been attracted by Italy?
Yes, as all Chinese students of art are.

And how did you live the cultural revolution?
I was 15 and, as all  students living in town, I was a follower of Mao’s thoughts and we were sent to the countryside to “teach” modernity to conservative peasants. I had to work the land, I even had to grow pigs ……to little purpose, I also worked in a mine.
In the country I was supposed to “re-educate” some ancient intellectuals, the so-called counter-revolutionaries. I was lucky to have the opportunity to “re-educate” one of the best chef in China. Actually he taught me the art of cooking . Thanks to him I understood that good cooking is art, an idea that I have shared with several fellow painters, particularly with Riccardo Tommasi Ferroni, Alessandro Kokocinsky and Tobia Ravà. I do not trust painters who cannot cook.

How did you meet Tommasi Ferroni?
At that time I was a correspondent for the art magazine of Beijing Art  Academy Art in the world. When I went to the Biennale in Venice where I visited an exhibition of Tommasi Ferroni. I thought he was very interesting and wanted to interview him. Then something really unexpected happened: during an embassy reception in Beijing I had been introduced to a painter and  when I was telling him about my plan  he stared at me saying “It’s me!”
The day after the local authorities wanted to take him to the zoo, in despair he called me hoping I could save him. We rented some bikes and visited the old town. Also Berlinguer’s children came with us cycling along old streets crowded with Chinese people.
It was Tommasi that really introduced me to the Italian painting . Some months later during a journey to Rome I went to see his studio and… I remained there for ten years. He gave me what I was looking for, I met other great Masters, Annigoni, Manzù, Sciltian.

And what about younger painters?
I am in touch with many younger painters. For example Alessandro Kokocinsky, Jonathan Johnson, Tobia Ravà with whom I attended a course of engraving by Bruscaglia in Urbino. In that particular occasion we had the opportunity to meet artist of all nationalities. It was great!

Why did you choose figurative painting?
I love  beautiful painting, for me beautiful painting means, a well prepared canvas, high quality paint, good brushwork. During our courses at the Academy we had the opportunity to experiment every technique: abstractionism, surrealism, hyperrealism, etc… We knew about Bacon, Jackson Pollock, Dalì, etc… After the Academy everybody chose his own way, for example my dear friend Chen Zen had a lot of success with his ingenious pieces. I was convinced that I could express myself thoroughly only through figurative painting.

What do you think about contemporary Chinese painting?
Nowadays young artists have got different cultural education I have little in common with. I only wonder… “Why should a young Chinese copy German expressionism?”

Why did you deal with Petrarca or Saint Lucas that do not belong to your own original culture?
In China I read Petrarca, I was even tested on his poetry. My Petrarca is symbolic, he wants to express the solitude of man. Also my Saint Lucas is symbolic, he is the patron of traditional painting; when he finds himself in a video art exhibition he is perplexed, exactly as sometimes it happens to myself.

I see that you like introducing your exhibitions with original music.
My relationship with music was born when I was a small child. I’ve always linked it to painting. Together they can express strong emotions.

Shall we meet a more spiritual Zhiwei in the future?
I have always been attracted by Taoism. Now I wish to go back to a monastery where I was in the past. That place has the colour and the scent of my grand mother’s memory.